Finding government documents & information at the Drain-Jordan Library, online, and around the world

The Executive Branch and the White House 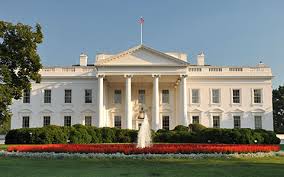 About the White House

More about the three branches of government

Descriptions of the three branches of government for kids

"The power of the Executive Branch is vested in the President of the United States, who also acts as head of state and Commander-in-Chief of the armed forces. The President is responsible for implementing and enforcing the laws written by Congress and, to that end, appoints the heads of the federal agencies, including the Cabinet. The Vice President is also part of the Executive Branch, ready to assume the Presidency should the need arise." whitehouse.gov

Definition of the Executive Branch

Established in Article II, Section 2 of the Constitution, the Cabinet's role is to advise the President on any subject he may require relating to the duties of each member's respective office. The Cabinet includes the Vice President and the heads of 15 executive departments.

Most federal agencies and departments (think three letter acronyms) are organized under the Executive Branch; this site provides a listing of official websites.

Abraham Lincoln Papers at the Library of Congress

"I Do Solemnly Swear . . . ": A resource guide to the Presidential Inaugurations. Listed alphabetically by President.

Thomas Jefferson Papers at the Library of Congress

Biographies of all 45 Presidents, including First Ladies. Provided by the White House.

Established in 1999 as a collaboration between John T. Woolley & Gerhard Peters at the University of California, Santa Barbara, The American Presidency Project archives contain 128,921 (and growing) documents related to the study of the Presidency.

"Presidential Libraries and Museums promote understanding of the presidency and the American experience. We preserve and provide access to historical materials, support research, and create interactive programs and exhibits that educate and inspire." Hosted by the National Archives.

Public Papers of the Presidents of the United States

This resource is compiled and published by the Office of the Federal Register, National Archives and Records Administration. Beginning in 1957, the Public Papers began after a recommendation by the National Historical Publications Commission established an official series in which Presidential writings, addresses, and remarks of a public nature could be made available to the public.